The Incredible Secret of Geothermal Heating and Cooling 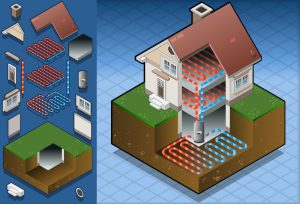 Geothermal heating and cooling may seem a bit like magic to homeowners—especially for homeowners who only recently found out that a geothermal HVAC system is a possibility for them and not something that’s out of reach. A geothermal heat pump has much greater energy efficiency than a standard air source heat pump, and it manages to pull off this trick through the simple concept of placing loops down in the ground rather than having the heat pump release and draw heat from the outside air.

What makes using the earth so much more efficient than the air? We’ll let you in on the secret in this post…

The Stable Temperature of the Earth

Yes, this is the big trick. Around 6 to 10 feet down in the ground, the temperature stabilizes and doesn’t shift widely compared to the topside temperatures. There’s heat energy coming from the Earth itself, but the temperature is also cool enough to work as a heat sink.

The geothermal heat pump temperature range is from 44°F to 55°F. It can be a blazing summer day in the high 80s or one of the coldest winter nights in the ‘teens, but down in the ground the temperature will still be in the 44–55°F range. This gives a geothermal heat pump easy access to the energy it needs whether in heating or cooling mode and allows it to work at high efficiency. Geothermal heat pumps are around four to six times more energy-efficient than air source heat pumps, and that can add up to hundreds of dollars saved on your comfort costs each year.

The Geothermal Heat Pump in Action

Let’s take the example of a late summer day (such as when we’re writing this). A standard heat pump works to move heat from inside the home to the outside. It’s harder to move heat into an area where there’s already a high concentration, so a heat pump expends more energy trying to push the indoor heat to the outside where it’s almost 90°F. The work is much less with a heat pump—45 to 35°F easier!

This energy efficiency isn’t the only benefit of geothermal heat pumps. Their ground loops can last for 50+ years and they’re environmentally friendly. There are plenty of reasons to look into going geothermal for your house—and you can start by talking to our technicians. We’ll find out how best to set up your house and property for geothermal heating and cooling.

First Choice Heating & Cooling serves Fenton, Linden, Holly, and the surrounding areas. If your home had a voice … it would call First Choice.