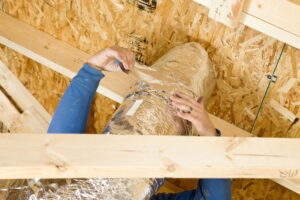 Your summer season inside your home has gotten off to a rough start. Even though you have a central air conditioning system that you’ve relied on before, something isn’t working right. It’s not just that the house isn’t cooling down enough, even though the air conditioner is sending out cooled air. It’s also that the house feels stuffy and humid, and your electric bills are higher than ever before. What’s going on?

There are several possibilities, but all of these problems are signs of a particular problem the house may have: leaking air ducts. When you’ve got leaky ductwork, it will create a host of problems like the ones we’ve already listed. If you’d like to have comfort restored in your house and an HVAC system that does what it’s supposed to do, call us for air duct sealing in Brighton, MI.

How do a few air leaks in the ducts cause all these problems?

The ductwork of a home is easy to dismiss because it’s hidden from sight and people take its condition for granted. So if they imagine a few holes in it, they might think it’s no big deal. Unfortunately, it is a big deal.

In order for the ventilation system of a house to work the way it’s designed to, it must have an airtight seal all along the length of its ductwork. This is what allows it to maintain constant air pressure so the movement of air through the ducts (both supply and return ducts) is powerful enough to create enough airflow to the rooms. If there is a breach along this seal, the air pressure will drop and lower the energy efficiency of the system.

Not only does the air pressure decline affect efficiency and cause a decline in the flow of cool air to the rooms, the escape of already cooled air forces the AC to labor harder. It has to make up for the air that’s going to waste through those leaks. Up to 30% of the cooled air in the ducts can escape through these air holes, meaning an increase of almost a third in how much the air conditioning system runs. That will account for a hefty amount of the electric bill.

These air holes will also throw off humidity balance in the house. The leaks open onto closed-in and stuffy sections of the home, such as the attic and between the walls. This allows for more humid air to enter the ductwork. This also affects the circulation of air around the rooms, which creates more stagnant air and a general stuffy feeling.

What can be done to fix this?

It’s not a difficult repair! You will need to have professionals handle it, however. Our team can perform air duct sealing to close off all the gaps, holes, and other leaks in your ventilation system. We’ll use special tools such as mastic sealants and metallic tapes to ensure you have an airtight HVAC system once more.

First Choice Heating & Cooling serves Fenton, Linden, Holly, and the surrounding areas. If your home had a voice … it would call First Choice!